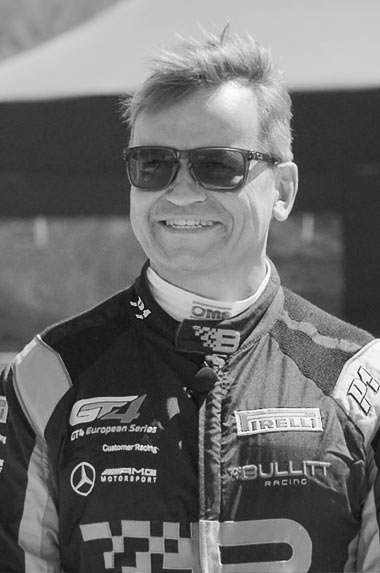 Founder & CEO of Bullitt Racing, Stephen Pattrick is a British amateur racing driver, with a fervour for speed.

Stephen’s enthusiasm and dedication to motorsport has enabled him to drive the team forward, demanding excellence for the entire team whilst supporting the close-knit crew with his vast knowledge and experience in its three-year history.

2020 sees Stephen get behind the wheel of a Bentley Continental GT3 alongside Andy Meyrick, racing in the Michelin Le Mans Cup.

Stephen continues to race in the SRO run GT4 European Series, partnering with Andy Meyrick in the #33 Mercedes-AMG GT4.

Additional races in the 2019 season include the GT4 South European Series in Portimão and Estoril.

Continuing with Bullitt Racing and switching to a Mercedes-AMG GT4, Stephen competed in a full European GT4 Series.

Additional races in the 2018 season included the GT4 World Final in Bahrain and The Gulf 12 Hours with Bullitt Racing.

Stephen undertook a full season driving for Bullitt Racing in the McLaren 570S GT4 in the GT4 European Series Northern Cup. Throughout the season Stephen was partnered with Andy Meyrick who provided lead-driver support including pro pace, strategy and race car development that resulted in early success for the team and included a pole at the Red Bull Ring and P2 in class.

Stephen founded Bullitt Racing, bringing David Price in as Director and confirming Andy Meyrick as a Pro driver for car #33.