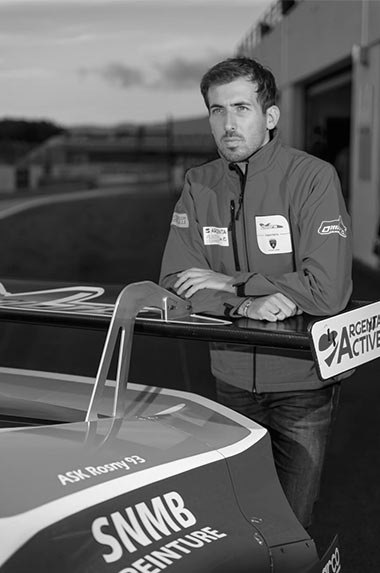 A 29-year-old Parisian, Romain started karting relatively late at the age of 14 after having played tennis for a long time. Always passionate about cars, his karting results enabled him to join the ranks of the Peugeot THP Spider Cup car championship in 2010.

Romain has also graduated business school with a Master’s in Finance and International Trade.

Romain drove for Bullitt Racing, partnering with Alex Lambertz in the #66 Mercedes-AMG GT4, at select rounds of the GT4 European Series. Romain and Alex took wins at Misano and Nürbugring for the team.

In addition to driving the #66 Mercedes-AMG GT4 Romain took a seat in an Alpine A110 GT4, the BMW 240i, the Lamborghini Huracan GT3 and a Mercedes-AMG GT3.

Romain raced in the Blancpain Endurance Cup with Ombra Racing in a Huracan GT3 and won the 24 Hours of Spa in the Silver category, achieved podium in Barcelona and came fourth overall in the championship.

Romain competed in the Blancpain Sprint Cup for Santeloc Racing in an Audi R8 LMS.

Romain raced a full season in the Blancpain Sprint Cup for Santeloc Racing in an Audi R8 LMS.

In addition to racing for Santeloc Racing, Romain also raced for Maserati Spa in the Competition 102 GT4 European Series in a Maserati Trofeo MC GT4 at Monza, winning Race 2.

It was also in 2015 that he won his first title, ‘Maserati Trofeo World Series Champion’.

Noticed by Porsche France, Romain benefited from the “Young Talent” grant, allowing him to compete in the very impressive Porsche Carrera Cup France in 2011.

From 2011 to 2014 he participated in the Porsche Carrera Cup France, with several podiums in professional category “A”.

He also took part in the Le Mans 24h Support Race in 2014, at the prestigious Circuit de la Sarthe.

Beginning his career in GT racing, Romain competed in the Peugeot 207 THP Spider Cup, a support series to the Le Mans Series, in which he finished in 7th place overall.