PODIUMS IN PORTUGAL FOR BULLITT RACING 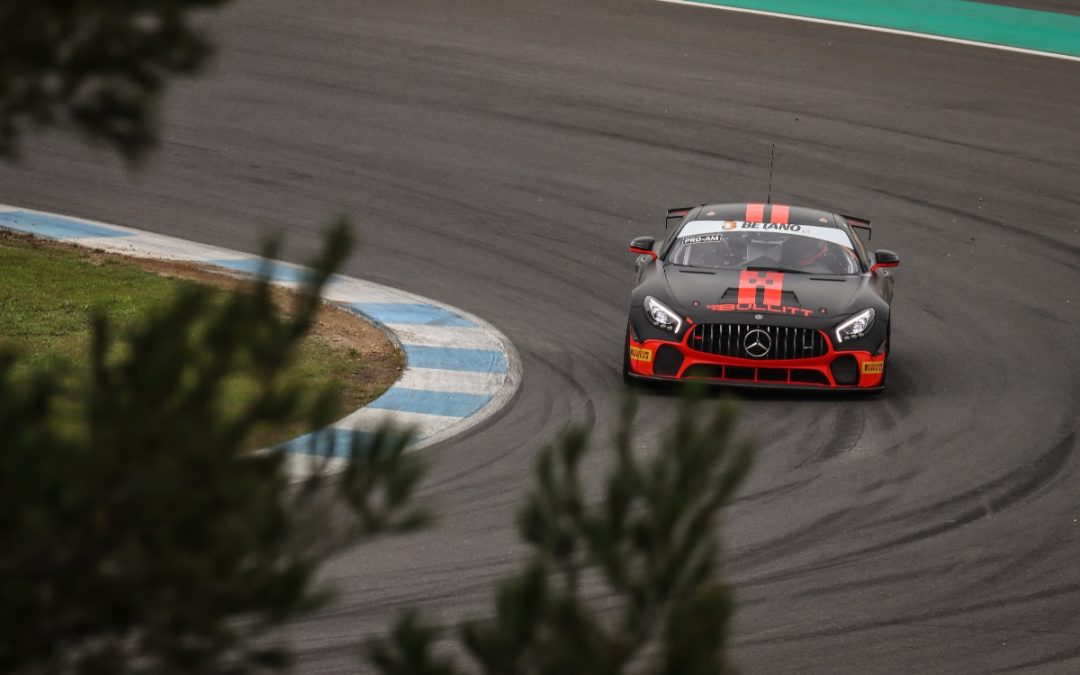 Bullitt Racing achieved a hattrick of outright podium finishes in the final round of the 2019 GT4 South European Series at a rain-lashed Circuito do Estoril in Portugal (22-24 November).

Callum Macleod and Ian Loggie rejoined the team in the #66 Mercedes AMG GT4 complimenting long-standing teammates Andy Meyrick and Stephen Pattrick in the #33 for the team’s last race of the year.

The Spanish based squad set the pace from the outset in Friday’s sopping wet free practice sessions with the wet weather sadly carrying over into Saturday’s two-part qualifying session. Pattrick was mighty from the get-go with the British Am setting a 2m03.476s to take P1, before further consolidating pole position by recording an extraordinary time of 2m01.124s following a red flag stoppage, caused by Loggie in the #66 machine. Mercifully, Loggie re-joined the session; he clocked a 2m02.321s to go second fastest and threaten for pole, only to have his lap times deleted.

Meyrick and Macleod stepped up to the plate in Q2, which set the grid for the second race of the weekend in Estoril. Having shot to the top of the times after his first hot lap, Meyrick was quickly challenged but had a hold on P2 for much of the quick-fire session as Macleod crept towards him after a troubled Q1 for the #66 Mercedes-AMG. Ultimately, a last-ditch effort by Meyrick yielded a 1m54s lap good enough for third on the grid, while Macleod worked his way up into the 1m56s to secure fifth in the final classification.

After the session finished, Bullitt Racing successfully appealed the stewards’ decision to delete Loggie’s Q1 times, enabling the Brit to take up his front-row starting position in race one on Sunday morning.

In the first of two GT4 South European encounters, both Bullitt Racing Mercedes-AMGs lost out to the fast-starting #6 Porsche on the run to Turn 1, where contact ensued. Pattrick and Loggie continued fighting further around the opening lap, a loss of momentum leaving them vulnerable to the #88 Veloso Motorsport Mercedes and #23 ABM Grand Prix Ginetta and resulting in a loss of track position. Unfazed, Loggie and Pattrick chipped away at the third-placed Ginetta before passing the reins to Macleod and Meyrick on lap 11.

Bullitt Racing held position after the stops, but Macleod was quick to catch and pass two cars for P2 while Meyrick recorded fastest laps to get on terms with his teammate. Meyrick’s determination to lead Bullitt Racing’s charge was evident as he hustled Macleod, and his efforts paid dividends, as he found a clean way past in the final throes to finish second, directly ahead of the #66 car.

Later that afternoon, heavy rain and fog forced Race Control to start the 2019 GT4 South European Series finale behind the Safety Car. Driving rain and poor visibility resulted in a red-flag stoppage, but while there was little or no improvement in the track and ambient conditions, the race was eventually resumed, with Pattrick and Loggie installed in the Bullitt Racing Mercedes AMG GT4s.

After a few sighter laps, the field was released from behind the Safety Car into a plume of spray for 15 minutes of seat-of-the-pants racing. Loggie established himself in second position and recorded fastest laps in a valiant attempt to reel in the leading Veloso Motorsport Mercedes. Unfortunately, the British Am was unable to bridge the gap and instead relinquished the runner-up spot on the dash to the line. However, he still recorded another outright podium for Bullitt Racing, while he and Pattrick also finished second and third in the Pro-Am classification.

Stephen Pattrick: “Even though the weekend was very wet, I felt very comfortable in the car. These last two races provided a great opportunity for us to race rather than complete winter testing before Christmas; so it’s acted as extra training which worked really well. We enjoyed having Callum and Ian back at Bullitt; they make a great team. The cars were very well prepared and the whole team did a great job so it made for a relaxed and a thoroughly enjoyable weekend.”

Andy Meyrick: “The whole team who did an amazing job this weekend. To achieve another double podium after our success in Portimão a few weeks ago is fantastic. Stephen in particular has made real progress with his driving throughout the 2019 season and it shone through this weekend; to take pole in such difficult conditions during qualifying on Saturday and then lead race two just goes to show how much progress he has made – I’m incredibly proud.”

Callum Macleod: “I have to say it was a very enjoyable race weekend for us in the #66 coming away with a double podium. It was great to watch Ian doing such a great job in race two, especially with the progress he’s made this year which showed in driving from fifth to second place in the wet. Overall it was a very rewarding experience and I would like to thank the whole Bullitt Racing team for such a good job and weekend with them.”