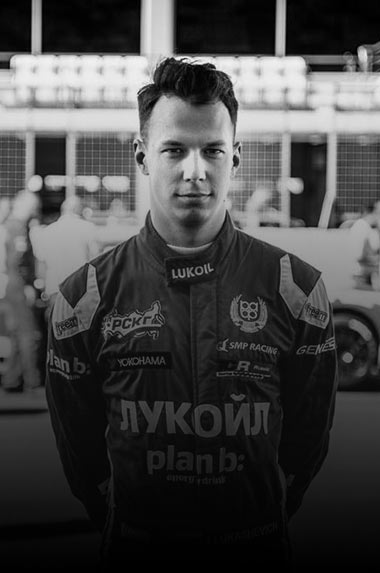 Ivan Lukashevich is a professional racing driver, based out of Russia. Ivan’s love for racing started at the age of 10 when he raced karts between 2001-2005. With an obvious talent, it was a natural step for him to further develop his racing and so in 2006 Ivan began racing in Formula Ford.

Ivan competed in select rounds of the 2019 GT4 European Series with Bullitt Racing. He partnered with amateur driver Oleg Kharuk in the Mercedes-AMG GT4 #66.

Ivan was also Team Principal in the Mitjet Series Russia.

Ivan once again competed in the Radical European Masters, securing a podium at the Silverstone round.

2016 saw Ivan compete in the Radical European Masters, securing a podium position at Paul Ricard and winning at Silverstone, in the Radical SR3 for Radical GP.

Ivan competed in the Toyota Racing Series New Zealand in the Tatuus TT104ZZ for M2 Competition.

Ivan also competed once again in the GP3 Series for Status Grand Prix in the Dallara GP3/10.

Ivan was also a member of the Marussia F1 driver development programme.

Ivan competed in the GP3 Series for Status Grand Prix in the Dallara GP3/10.

He also competed in Formula Renault 2.0 Eurocup in the Barazi-Epsilon FR2.0-10 for Team Firstair.

Competing in Formula Palmer Audi once again, Ivan achieved 3rd at Brands Hatch and 2nd at Silverstone. where he set the fastest lap of the race.

He competed for Audi Russia Motorsport in the Van Diemen Spec Formula (Audi 1.8 Turbo) in the Formula Palmer Audi series.

Ivan began his racing career in Formula Ford, with John’s Racing Team in the Spirit 2006 car.