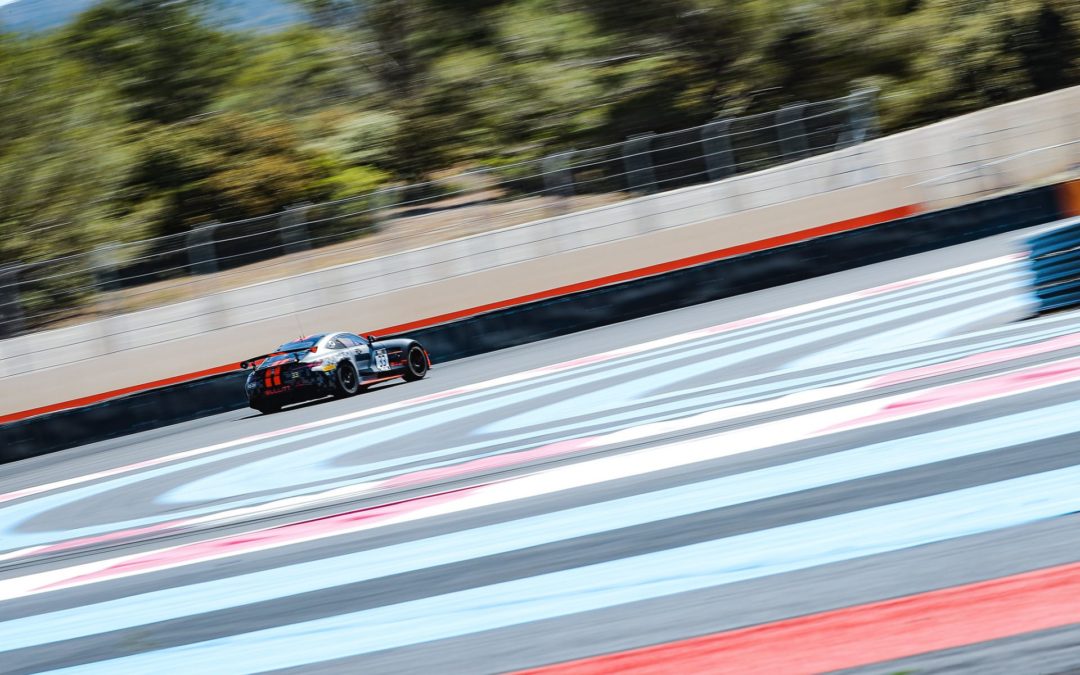 Bullitt Racing took a well-deserved seventh-place finish at Circuit Paul Ricard today (2 June) as the team showed its fighting spirit throughout the third round of the GT4 European Series The Malaga-based squad travelled to the French Grand Prix venue following a strong showing last month at Brands Hatch, where the #33 Mercedes-AMG of Stephen Pattrick and Andy Meyrick contended for the Pro-Am class podium and ultimately took a double-points finish.

The team continued its two-car effort at Circuit Paul Ricard, with the #33 once again joined by the #66 machine of Ivan Lukashevich and Oleg Kharuk. Though the Bullitt Racing Mercedes-AMG GT4 ran well during the weekend, the track configuration did not play to the car’s full potential. This put the team in a pragmatic mood as they sought to extract the maximum from the event.

Saturday’s opening race proved to be a disappointing affair, despite an early promise for the Bullitt machines. Meyrick took the start from eighth in the #33 Mercedes-AMG, with Lukashevich one place back in the #66. The British driver was immediately competitive as he looked to move up the order, but contact with another car eliminated the #33 from proceedings on the first lap. In the #66 machine, Ivan quickly climbed three spots to run sixth in Pro-Am as the field completed their opening tour. Unfortunately, the car was forced to stop on-track shortly afterwards due to an engine issue, ending the Bullitt Racing squad’s efforts early. This problem would also force the #66 to withdraw from Sunday’s second race, but the #33 Mercedes-AMG was on-track with both drivers determined to complete the weekend with a strong result.

Stephen made good early progress, rapidly moving up from 14th on the grid, only to fall back again when a front-left puncture necessitated an unscheduled pit stop. The British driver was able to re-join the back of the pack thanks to a safety car period and, once racing resumed, climb the order again. Pattrick then handed the #33 Mercedes-AMG to pro driver Meyrick, who continued to move the Bullitt machine forwards during the second half of the race.

Meyrick showed his experience with a fast, consistent performance that was ultimately rewarded with a satisfying seventh-place at the chequered flag. The solid haul of points that the #33 machine scored was particularly impressive given the nature of the circuit and the issues that the squad had to contend with. They will hope to carry this momentum into the next GT4 European Series event at Italian venue Misano (28-30 June), where the Bullitt Racing crew will look to once again contend for a place on the Pro-Am podium.

Stephen Pattrick: “Sunday’s race started well for us. We passed three or four cars, but then I noticed my front-left tyre had a puncture. I did another lap and had to limp in to change it. My rear-left was also going down, but I managed to hold on until the pit window and the guys did a fantastic job of changing it when we stopped for our driver change. Andy then kept moving forward and, all in all, we had a really good day. The circuit doesn’t suit the Mercedes-AMG, particularly in terms of top-end speed, but we have managed to play an excellent strategic game. Overall, it’s been a positive weekend.”

Andy Meyrick: “Seventh place is a good result to take from this weekend, particularly after our DNF in race one. In the second race, Stephen did brilliantly to hand me the car after suffering two punctures. He’s done a really good job this weekend. The circuit isn’t ideal for us, but the Mercedes-AMG GT4 is a good all-rounder and the brand gives us excellent support. Overall, we can be very satisfied and look forward to Misano, which should be a good track for us.”