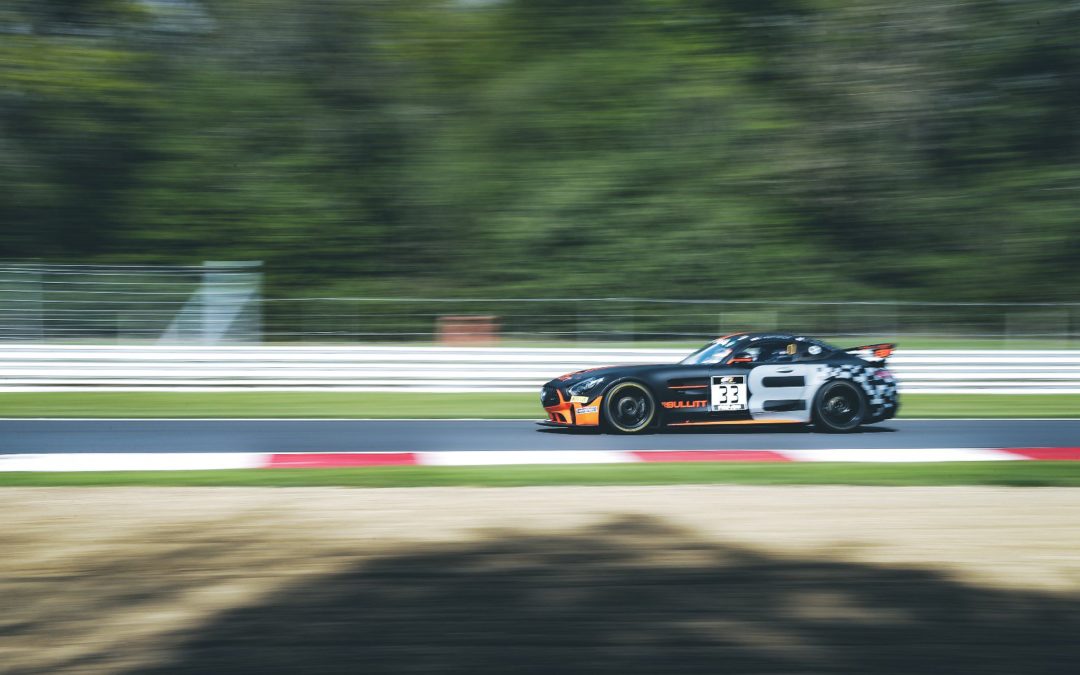 Bullitt Racing emerged with strong GT4 European Series points from a demanding weekend at Brands Hatch, with a brace of top-10 finishes for its #33 Mercedes-AMG tempered by an event-ending accident for the #66 entry.

Both cars ran well in free practice and qualifying at the Kent track, giving the team hope of contending for the top positions in GT4’s ultra-competitive Pro-Am class during Sunday’s pair of 60-minute races.

The opening contest saw team owner Stephen Pattrick start aboard the #33 Mercedes-AMG and Oleg Kharuk at the controls of the #66 he shares with Ivan Lukashevich. The two Bullitt Racing cars briefly went side-by-side through Druids, with both drivers displaying their composure to avoid contact at the tricky downhill corner.

The race was soon neutralised due to a car stranded on-track. When the green flag flew once more Stephen made progress as he fought to move up the Pro-Am order. Oleg continued to run in the pack, but suffered an accident that eliminated the #66 Mercedes-AMG from proceedings early.

The safety car was deployed once again, after which Pattrick handed the controls of the #33 machine to co-driver Andy Meyrick in a strong position to make further progress towards the front of the field. Pro racer Meyrick capitalised on this opportunity, moving up the Pro-Am standings to contend for a spot on the class podium. He ultimately finished an excellent fourth, just two seconds shy of a top-three finish after a battling drive.

The race one accident prevented the #66 Mercedes-AMG from contesting the second outing, but the #33 crew of Pattrick and Meyrick were on-track once again at 14.45 chasing another strong showing.

An excellent qualifying performance placed Meyrick third among the Pro-Am runners for the start, and the British ace made that second spot on a typically frantic opening lap around Brands Hatch. As the mid-race pit window approached Meyrick had taken the class lead and was preparing to hand over to Pattrick in the best position possible.

But the Bullitt Racing squad’s hopes took a knock when Meyrick suffered a puncture at the final corner of the circuit, forcing him to complete another full lap before he was able to stop. With the pit window open Pattrick was able to take over from Meyrick while the shredded tyre was replaced. The British driver ran strongly as the #33 Mercedes-AMG sought to recover the lost ground. Pattrick fought hard to bring the car home P8 in the Pro-Am class, completing a double points finish for the Malaga-based outfit.

Stephen Pattrick: “The team worked magnificently this weekend and the car was great. Looking at all things, we couldn’t expect to perform much better. We know the team around us and the car we have, so when I’m driving to my ability we can contend for top-three finishes. We showed that in race two especially, where we were going for a podium until we suffered the puncture. Credit to Andy, because I don’t know how he got the car back to the pits! There’s plenty of promise and we’ll certainly be targeting the podium at Paul Ricard.”

Andy Meyrick: “It’s been a mixed weekend. In race one, Stephen did a great job and gave me the car in good condition. It was handling well and we finished fourth in class, which, from the back of the grid, was an amazing result. We were confident heading into race two and got up to second in class, then took the lead as we approached the pit window. The car was handling perfectly before the puncture, which cost us dearly. Again, Stephen showed real composure to finish eighth in class. Bullitt Racing put a really good car out there this weekend and I’m proud of them for that.”

The Brands Hatch weekend provided entertainment off the track as well as on it as Bullitt Racing welcomed a competition winner for the weekend, with race tickets, lunch and behind-the-scenes access all part of the lucky recipient’s prize.

With the British event complete, Bullitt Racing will contest its next GT4 European Series round at Circuit Paul Ricard, with the French venue playing host to the championship on 31 May-2 June.